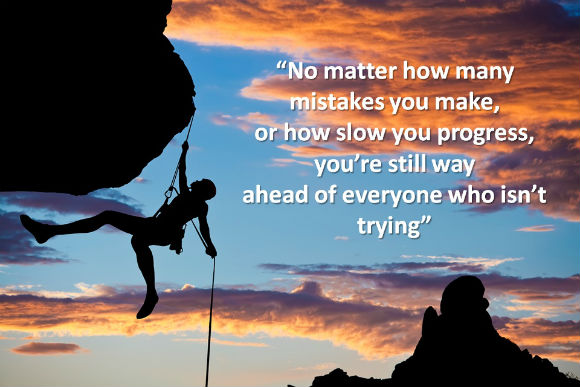 Rowland Hussey Macy is a name that you will probably recognise, but when quoted out of context like this you may not fully connect him with the accomplishments that he is known for.

When he opened “R.H. Macy Dry Goods” in 1858 in downtown New York it was his fifth attempt at building a successful business. During the period 1843 and 1855 he opened four stores, starting with his original downtown store in Haverhill, Massachusetts. They all failed.

This store was different. He learned from each mistake he had made with his previous failed ventures and by the time he opened this one, he had learned how to run and market a business successfully.

Was it easy for Macy – no. He had great ideas, but had to persevere. For example, Macy arranged a parade when he was in Haverhill. As he had an out of town location where he was struggling to keep the doors open he thought this might lure people in. This was less than successful partly because the parade was held in the heat of high summer. Today, who (in the US) is not aware of the Macy Thanksgiving Parade that takes place on the fourth Thursday in November each year? Great idea, fixed when attempted at the right time, based on the learning.

There is a perception that success is easy for people like Macy. This is not the case, they work hard and frequently have to endure hardship and difficulties along the road to success. However, what sets them apart from those are less successful is they set aside their negative feelings for the situation and look at how they can improve their chances of success next time. They persevere.  Thomas Edison once said that:

Our greatest weakness lies in giving up. The most certain way to succeed is always to try just one more time.

When you don’t succeed, do you give up, or do you dust yourself down, learn the lessons and have another go? Of course the lesson might be that you have unrealistic goals.

It is important to understand the difference between giving in and giving up. Giving up is an emotional act, which would suggest that you might be walking away when there is still some fight left, or there is some unfinished business to complete. Giving in is an ending, a peace in the realisation that there is nothing more to give. Sometimes we have to recognize that difference, and learn how to let go.

So if you are not at the point where you feel that having another go is insanity, give whatever it is you are trying to succeed at, another go. However, don’t do this until you have figured out what you might need to do differently the next time, and try again – as Macy did with his fifth store. Otherwise, the chances are the same thing done in the same way will probably, and predictably, have the same results.

So, if success appears to be eluding you, what can you do? You may not need any help, you just need to pick yourself up, readjust and have another go. However if you do need help, working on your resilience can be a good place to start. I’d suggest:

In fact, using these tips helps even if you don’t feel you need to be more resilient. Well grounded people with the right focus and perspective who are grateful for what they have will undoubtedly do better in life, in the long run.

You can also work with a coach like myself to start working towards one of your goals (#startsomething) or you can change something that is not working for you, or where you could be more successful (#changesomething). If you want to succeed at your goals and it is not happening for you, how will the situation improve if you don’t do anything about it? The world belongs to those who DO, in all walks of life.

Remember that even the people we would hold as the most successful in life have probably had set backs. This is one of the things we can earn from Macy’s life experiences. If setbacks didn’t stop him, why should they stop you? Take action towards your goals- it is the only way to find out.

As an interesting aside. Why does Macy’s have a star as the store emblem? At the age of fifteen, Macy worked on the whaling ship Emily Morgan and had a red star tattooed on his hand. This later became part of the store’s logo. Whilst Macy’s has long since been a part of a large Retail organisation, the red star is still a fundamental part of the brand he created. That is his legacy. If you don’t persevere, what will yours be?