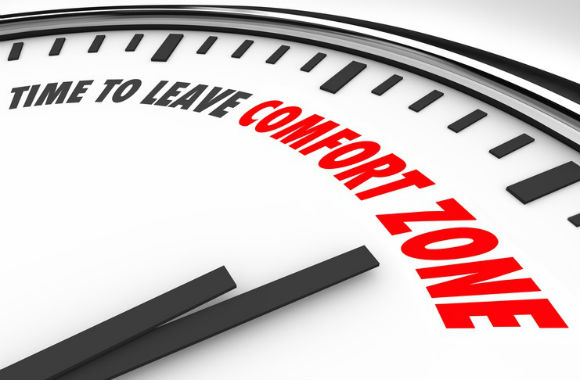 Complacency is one of those situations we often believe will never happen to us. You may have seen this story on LinkedIn

During the press conference to announce Nokia’s smartphone division being acquired by Microsoft in 2013, Nokia CEO Stephen Elop ended his speech saying this:

“we didn’t do anything wrong, but somehow, we lost”.

For those of you who remember, in the early days of mobile telephones, Nokia was the brand to beat. The main advantage of their phone was ease of usability – in the days when everything was menu driven, their ease of use beat everyone else hands down. So, to paraphrase Elop, why did they lose?

There are lots of anecdotes about Nokia on various technology blogs and the theme seems to be that Nokia as an organization felt it didn’t need anyone else. When innovators approached them with ideas for web integration they were told that Nokia didn’t need to work with them as they had their own capability to do whatever they wanted with their in-house engineers. Consequently market dominance appeared to give rise to a degree of arrogance.

However to really answer the question how did they lose, you have to look at their market share figures: 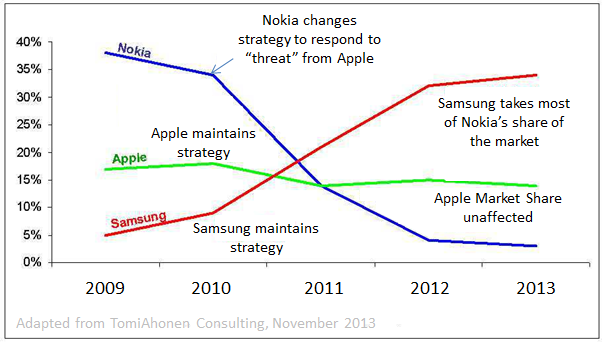 This is one of those graphics where a picture really does say 1,000 words.

Towards the end of 2010 Elop declared that Apple was Nokia’s biggest threat and decided to compete head to head with a Windows based phone. The consequences were its market share (the blue line) more or less fell off a cliff. In making this decision Elop ignored Samsung completely. Arrogance then gave way to complacency. The charts tell the rest of the story and the Nokia phone business was sold to Microsoft in 2013.

Interestingly, the chart does not show the Blackberry market share which was 41% in 2010. With the demise of Nokia, Apple and Android phones cornered the market and Blackberry also suffered as a business.

What can we learn from this?

It seems obvious, but you need to focus on the right problem. Instead of simply assuming you know what he problem is, consider it from different perspectives. Had Nokia considered the market need, it would have seen that its end customers desired something different. Get other people to challenge your thinking and avoid confirmation bias (where you agree with those facts that support your thinking and discard those that don’t). If it is an important personal decision, speak to a coach.

Avoid complacency. In the last 30 years we have seen a succession of companies rise and fall. It was once said, “customers can’t get fired for buying IBM”. Their market dominance was broken with the rise of the Personal Computer and Microsoft became a dominant organisation . These days, we look to Facebook, Amazon and Google as market leaders. The truth is they can all be displaced by paradigm shifts. Those that survive are the ones who anticipate the consequences of market or technology shifts and are flexible enough to adapt. Your competitor may be small now, but if they have a compelling proposition and the right customer offering, it may not be long before you are looking over your shoulder. This can happen for us as individuals too – we get comfortable and can lose our edge.

There is never a right time to act

Sometimes you have to deal with the future when it happens. Sat in 2010, the future for Nokia was an extrapolation. So there was nothing wrong with them making determinations about how their industry was going to change. When market share started to slide, they still had an opportunity to challenge their thinking and turn things around. Ignoring it and forging ahead regardless finished them as a (previously successful) business.

So, what did Nokia do wrong? They were complacent and didn’t see Samsung/Android as a threat. In some ways business is simple, you have to offer something that people actually want, or believe they need. Cost and profit aside, when you lose touch with your customer, you are at the top of a very slippery slope, no matter how big you are as an organisation.

There is also a personal lesson here. Complacency affects individuals as much as organisations. So perhaps it is time to #Changesomething or #Startsomething. If you keep doing what you have always done, is this a strategy that is going to work forever? Maybe it is time to speak to a coach and get a reality check? Otherwise, you may end up like Nokia, out of the game and wondering what happened. There is never a better time than now to get in touch with us.